This blog has moved to EdgyJuneCleaver.com. Click the link if you aren't automatically redirected.

Posted by EdgyJuneCleaver at 1:06 PM No comments: 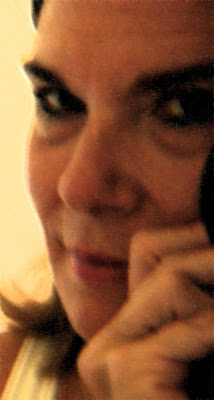 So 'member when I said I was dreaming about babies and was blathering about new things and new beginnings and stuff last week?

Well here it is!


June's new addy!
Posted by EdgyJuneCleaver at 5:44 AM No comments:

Bitter Table For One! 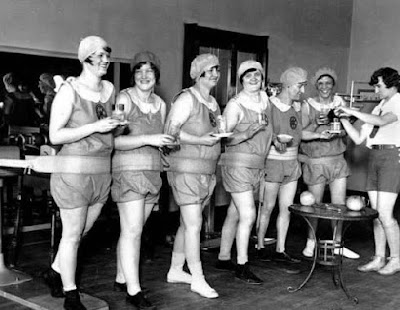 my girlfriends are here
I’ve been to the gym three out of the last four days. Where the Hell are my results? The number on the scale hasn’t budged, and I still can’t button my skinny jeans or pull them over my fat ass for that matter.

Don’t I sound like a typical 21st century American? I want results instantly and if I don’t get them I’ll make it happen. Thank goodness I don’t have the money to plop down in the direction of a plastic surgeon with a vacuum and scalpel I hope I wouldn’t even be tempted. The other ridiculous choice is this machine I saw this weekend. You stand on it and it vibrates you whole body really hard, “burning fat”. Oh what the Hell ever. The Girl and I immediately flashed on those vibrating machines with the waist bands. And you know what was really sad? Someone was seriously entertaining buying one. In this economy? Really? Dude, join a health club and employ a few people. People have way too much money. I would like to think I would use all that money to employ a trainer to baby-sit my exercise regime and my food choices.

And the other option behind Door Number 3: Puking and diet pills. Worse than the surgeon in long term side effects. What’s really alarming about that option is the fastest growing population of anorexics and bulimics are in my age group or so I read in nursing research a couple of years ago. Wow, just wow. If you missed the Dorm Barforama with your besties in 1983 here’s your second big chance! And God knows I hate being like everyone else so I guess I’ll stick to the gym and find a diet plan that works for me and doesn’t make me feel like I’m missing out on food I enjoy. This whole getting fat thing has made June bitter bitter bitter.

Granny better watch out. I’m gonna do level three for fifteen minutes tomorrow and then I’m going to faint and then I’m gonna have a moon pie.
Posted by EdgyJuneCleaver at 10:00 AM 2 comments: 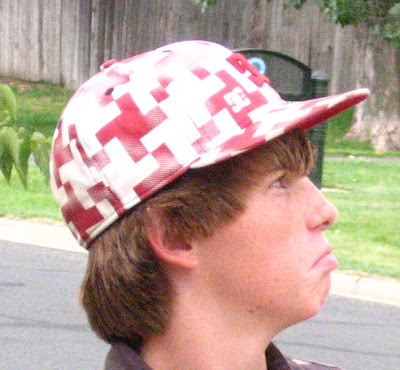 Do you ever have those moments of pure unadulterated joy after an epiphany? I did this morning after I was greeted at the dark hour of 0630 by angry voices arguing over hair gel. Beav was quite upset a large dollop of gel had been scooped from his gel and started accusing Wally. At first, Wally took it in stride and laughed at him: “Dude, I don’t have any hair why would I use your gel?” But Beav wouldn’t leave it alone and just kept at his brother with increasingly heated accusations which naturally escalated Wally. I had to knock on the bathroom door because I truly thought it was going to come to blows. I also wanted to break it up because I couldn’t believe they were arguing over hair gel. Had they not been so grouchy and I hadn’t been half asleep myself I would have said something smart like: “Ladies, please, inside voices.” Instead I looked at the gel and shrugged my shoulders and told Beav to chill out and get ready for school. They were still fussing at each other when I walked downstairs to leave the house.

As I was sitting in the car beginning to fume over how much I hated to hear them fight with each other and over hair gel of all things…the realization of how these sorts of spats would be an almost daily occurrence if I had daughters. It was then the joy and peace that surpasses all understanding swept through me and made me whisper the following prayer for the thousandth time:

Thank you for sparing me teenage girls.
Posted by EdgyJuneCleaver at 4:21 PM No comments:

Grill Zombie and other adventures in the suburbs 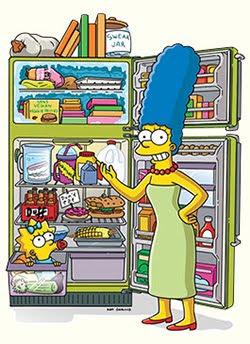 
Have I mentioned how much I dislike cooking? I would rather scrub a toilet than cook. I’m not sure why I have such a strong emotion about cooking and blame my lazy nature. But really, cooking doesn’t interest me all that much. Food interests me. There are a few things I can make well but we can eat them every day. What I like to cook is old fashioned heavy sauces with lots of cream and butter. But like I said yesterday--

The Exploding Cheese Incident this week brought to light just how much I hate to cook. I was completely distracted by the pork in the oven which wasn’t cooking but was drying out and turning into something more suited for footwear. It was my self-inflicted ire which distracted me and made me forget the rule about hot glass and cold metal. And I was right about those pork chops: dry and tough. But everyone ate them out of fear.

In fact, I used to lie and tell people I didn’t know how to cook. It worked on TG for almost six years until a few weeks ago we were at our second favorite French restaurant and the vichyssoise was like sipping clotted cream with a spoon. I was terribly disappointed and all the sudden the martini started talking: “This is awful; I can do so much better than this! This soup needs leeks and dill to finish it off.” My proclamation was met with raised eyebrows.

You see, if it were just me, I would be happy with grapes and microwave popcorn on the rare nights I didn’t go out or have left overs from going out.

I can readily admit I enjoy cooking winter types of food. I don’t mind putting a very large piece of meat in the crock pot with vegetables and calling it soup or stew. I like to make chili and soup. My roasted chicken is always good, too. But summer cooking calls on a more imaginative cook to avoid heating up the kitchen thus the house. “So grill, June. Grill.” Was the girl’s remark to me the other night. And I had to explain to her

Because I am afraid. Very very afraid.
Not the meat part. I do know people who are squeebed out by raw meat and can’t touch it or cook it. But, hello? I’m a nurse? It’s the lighting of the grill. Now before all my kind readers take up a collection to buy June and TG a nice self-igniting gas grill, put your checkbooks away and log off paypal because we have one. My fear is so deep set; I’m even tripped out about turning the switch on this one. Rationally, I know it’s probably safer than any of the gas ranges in any of the crappy rent houses I lived in during and just after college. 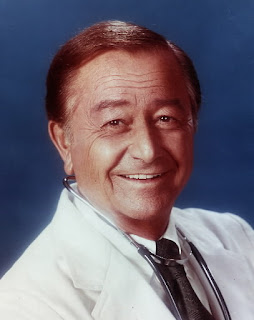 When I was a little girl, me, my sister and mom watched Marcus Welby, MD, religiously every Sunday night. I enjoyed the medical stuff and my sister enjoyed it because of this guy. ------------------> 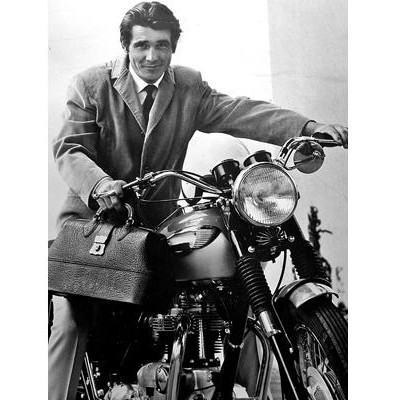 the original Dr. McDreamy found here
And well…duh…James Brolin was so hot on that motorcycle, a new breed of doctor, with his sideburns, bell bottoms and his blatant 60’s prime time style sexuality.

Anyhow, there was an episode in the 70’s (it was in color so it was definitely the 70‘s) and a woman was hostessing a BBQ. It must have been a particularly festive party, too. My mom wore shorts or slacks when we had people in for grilled meat. This woman had on her 100% petroleum based polyester maxi dress with long flowing sleeves and to complete her groovy ensemble she had her hair (or a wig) stacked way way way wayway way up on her head secured--no doubt--with two or three cans of Aqua Net. Mrs. Maxi Dress is prancing around the kitchen and she goes into the backyard with her big tray of steaks or what have you and tries to light the grill. And tries again. She even leans her face down to see if something is the matter and can’t see anything so she puts more lighter fluid on the charcoal, steps back and throws a lit match and

Up in flames, burnt beyond recognition. The end. Her life is over. Bye bye.

It could happen to anyone, especially me because I always cook dinner in long flowing maxi dresses with drapy sleeves made by our friends at the DuPont Corporation and my hair saturated with highly flammable hair spray.

And because I don’t want to spend the rest of my life like a mummy with gauze wrapped around my face and hands, struggling to talk; I won’t grill.

So what’s for dinner?

Probably mac and cheese if they are lucky.
Posted by EdgyJuneCleaver at 5:59 AM 2 comments:

Email ThisBlogThis!Share to TwitterShare to FacebookShare to Pinterest
Labels: chores, The Girl

I Say Moo to the MuuMuu

The Girl has informed me the critter taking bites out of our tomatoes is a “tomato slug” I of course think this is some sort of mysterious Midwestern code for “raccoon” but she feels a raccoon would eat the whole tomato. Sometimes at night, I’ve seen raccoons walking down the street and they are so big they look like a gang of unruly preschoolers. They take a bite from a tomato and leave the rest behind to mock me.

I discovered yesterday we have a yard cow. And she is me. Moo.

I’m rededicating my life to the gym and possibly a diet program. I’ve never had to do a diet program. The only diet program I’ve ever been on is the “Eat Whatever the Hell You Want” diet. Since I quit smoking a couple of years ago and am creeping up on the big 5-0 coupled with new job which is mostly behind a desk, the numbers on the scale are getting bigger and my favorite jeans are smaller.

It was depressing getting ready for an evening out last night because I looked like Hell in everything I tried on and am becoming precariously close to not fitting into clothing from my all time favorite store. The only thing that cheered me up was squishing my lard ass into spanx and my new blue eye shadow.

Which I rocked. The eye shadow that is.
Posted by EdgyJuneCleaver at 8:19 AM No comments:

EdgyJuneCleaver
where the rocky mountains meet the midwest
I always secretly longed to be June Cleaver but sadly, it isn’t going to happen. I’m only a part-time SAHM; I dislike cooking, I yell at my kids, and I’m queer. Besides all those niggling details, I tend towards bitchy and swear like a sailor. But I refuse to let go of the fantasy and on any given day I might just be vacuuming in my pearls. I live with my partner (The Girl); my two sons (predictably referred to as Wally and The Beav) and our dog Kipper. I am passionate about home keeping, making art and my calling as a nurse. God only knows what will appear in this blog. I only hope my writing exercises are an exercise in entertainment and enjoyment for you. Any images seen on the blog belong to me unless I give credit where credit is due. If you see something you like email me first.